The Ultimate Guide to Boosting Your App

Did you know that there are now over 2 million apps on the Apple Store and Google Play Store? There’s so much competition that it’s very often difficult for app developers to make their apps stand out.

Facing this vast choice, users quickly find themselves overwhelmed and don’t always end up with the results they expected from their search.

Victims of their own success, Apple and Google, the two current market leaders, have been trying (and not without difficulty) to improve their experience since they launched. The algorithms that Apple and Google’s online stores employ are therefore regularly updated.

App Store Optimization (ASO) is the technique that allows you to optimize the different features of an app, which have been considered by an algorithm, in order to make the app more visible and therefore, increase the number of organic downloads.

Apps are indexed and classified according to an algorithm which is unique to each store. These algorithms consider various features of an app in order to give them higher or lower visibility.

This was how the term App Store Optimization (ASO) was born. This technique has steadily become a popular practice, alongside Search Engine Optimization (SEO).

Indeed, just as SEO does for websites on search engines, App Store Optimization aims to increase the visibility of apps within app stores. The goal is therefore to boost their position in the different categories on the respective stores, and in relevant keyword searches.

The main features that can be optimized according to best practice are as follows:

The icon is the first feature that the user sees when browsing the store. It therefore, generally, provides users with a first impression of the app, and so it must be perfectly designed.

It’s important that the app’s logo reflects its essence and complements the title. The user should very quickly be able to understand what the app offers, so it must show the essential information without using any text.

The best practice is to focus on a simple design, of high quality, in line with the design and feeling of the app. This must all be done whilst respecting the dimensions required by the app stores.

The app’s icon will be constantly displayed on the user’s screen once the app is downloaded so it must be visible and distinctive against various backgrounds. It’s therefore important to do several tests and it could prove useful to use a border.

Once the icon has caught the eye, the title is quickly searched to provide the final information. As well as being unique, descriptive, and coherent, the title must make sure to include the most relevant keywords for the app.

Whether on the Apple Store (max. 50 characters) or the Google Play Store (max. 30 characters), the app’s title is an essential feature for reference. The keywords that it contains will be considered by the algorithm which will then classify the app in the search results.

Given the restricted number of characters that can be used, it’s vital to focus on the 3 or 4 most important keywords.

Finally, it’s particularly important to avoid special characters since the app’s name is repeated in the app’s webpage URL (on iTunes or Google Play). If it’s not correctly recognized, the app can only be referenced using the app ID, which is bad for the SEO. 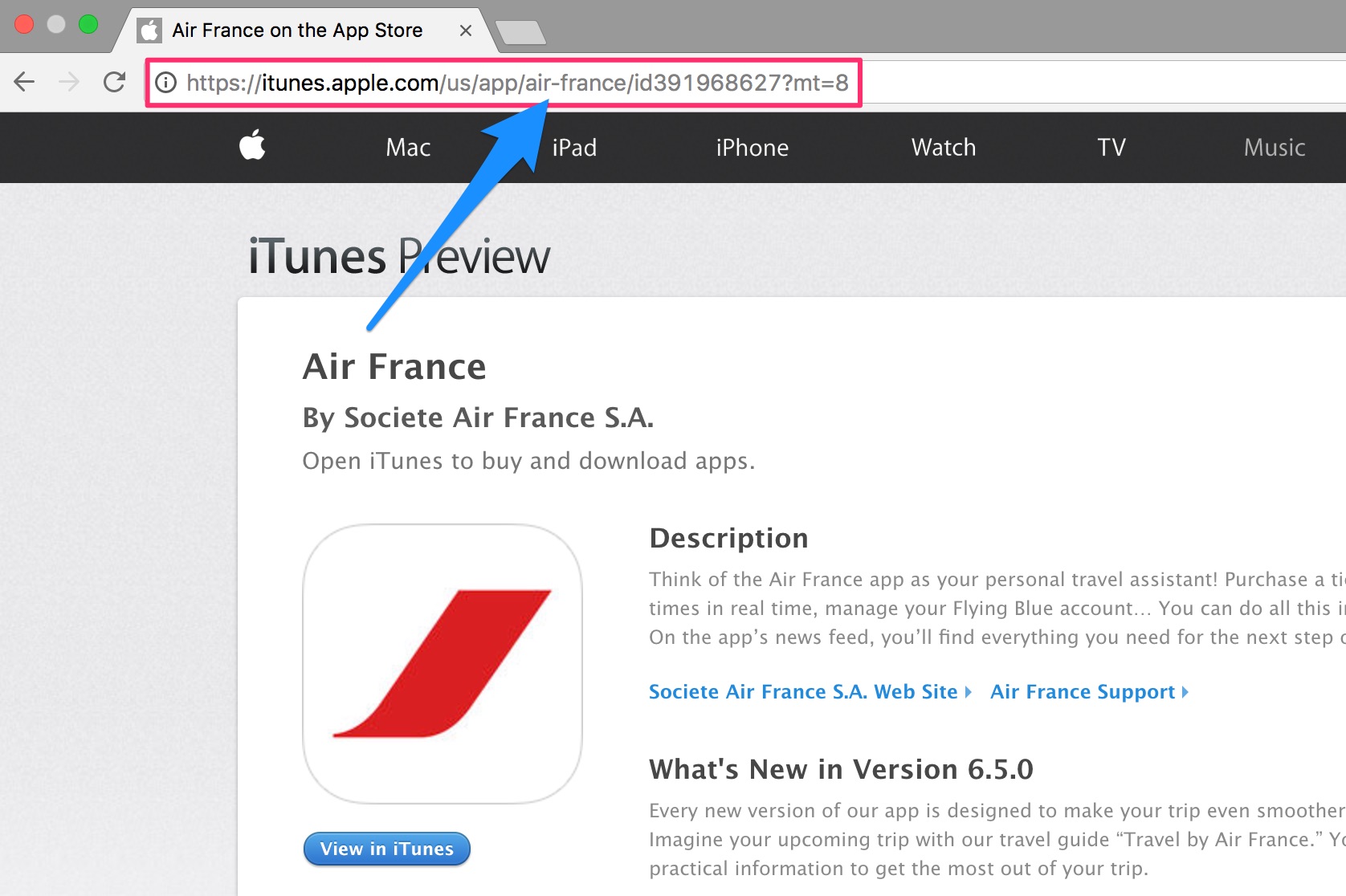 Although the first two features listed have the same role in the Apple and Google store algorithms, the description is treated differently.

The description is actually not taken into consideration by the Apple Store algorithm. However, as each app is indexed online using the product page, SEO mustn’t be forgotten. That’s why it’s still important to optimize an Apple description with good keywords.

Despite this, the description (along with the title) is the most important reference location on the Google Play Store. Just as for SEO, keywords must be used wisely and carefully.

Here you should aim to create relevant and coherent sentences which include important keywords combined with others. It’s advised to repeat every keyword that’s considered to be a “main” one (choose +/- 10) around 5 times in the description.

The description is also very important in terms of conversion as it must convince the user to download the app. What’s more, the visible description is limited to 3 lines so you must be particularly convincing right from the start, in order to make the user click ‘more’ to read the rest. 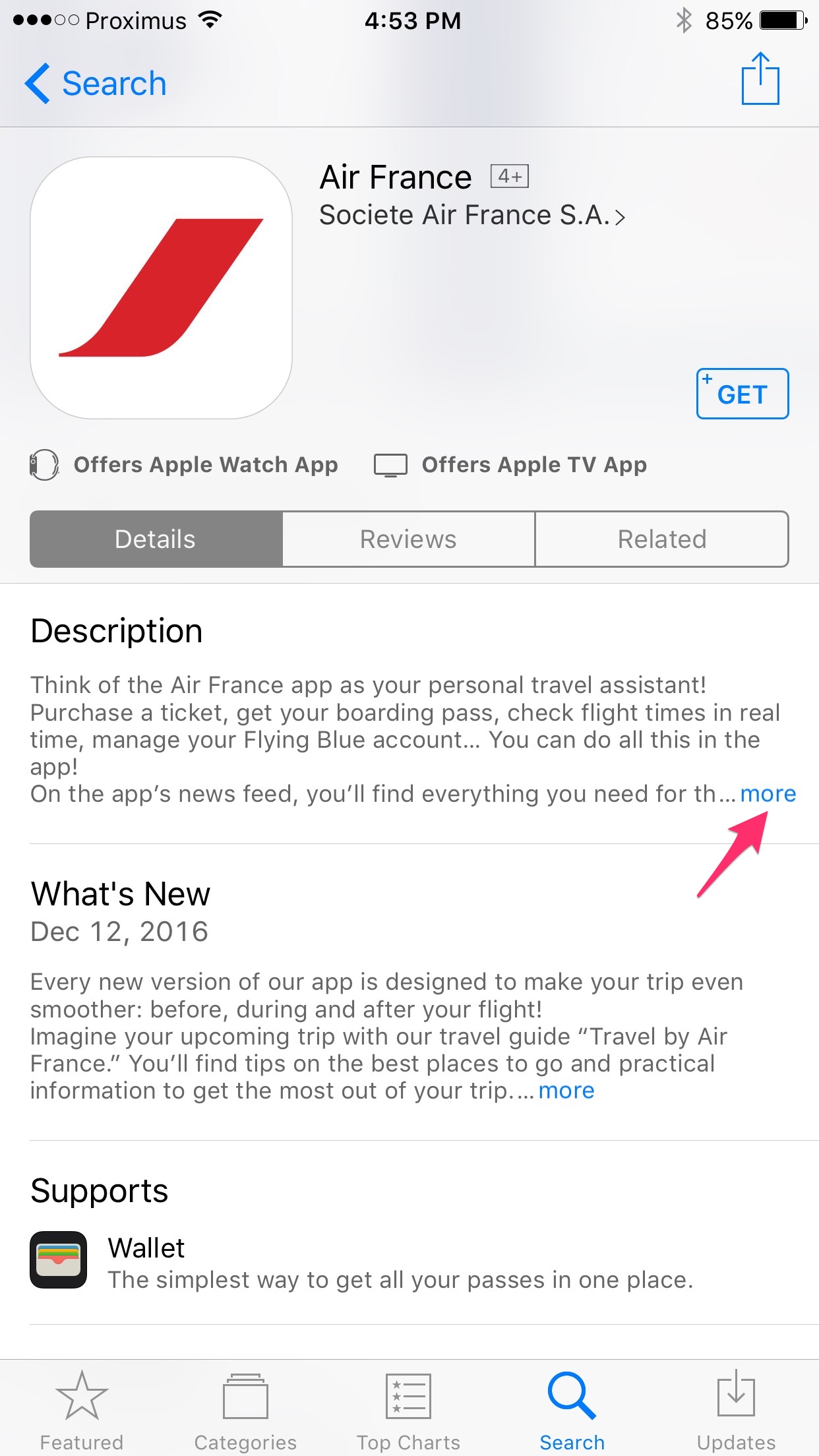 4. Keywords, the most important element of ASO

Keywords are one of the most important aspects of ASO. Apple provides a specific field called the “keyword field”, which isn’t visible to the user, but which allows the algorithm to index the app on certain terms. This field can’t go beyond 100 characters, or around a dozen words.

It’s strongly advised to use simple terms (unique words), separated by commas, with no spaces. The algorithm will automatically combine the keywords among themselves. It’s not necessary to repeat the words you’ve already chosen in the app’s title or the publisher’s name as they will only be taken into consideration once.

Whether optimizing for Apple or Google, the aim is to find keywords that are relevant to the app, but also popular keywords (often searched for by users) whilst being a little competitive. This is why keyword optimization is so difficult, because words like this are not easy to find.

Fortunately, there are some ASO tools such as AppTweak which offers the whole range of features for auditing, researching, optimizing, and monitoring an app’s keywords.

Just like the icon, the other visual elements are vitally important in ASO, particularly in terms of conversion. Users are becoming more and more used to quickly scanning through the search results and quite often only stop when they’ve been attracted by the visuals.

If the screenshots are bad quality, users won’t want to download the app. It’s therefore important to provide screenshots that are high resolution and optimized for every screen size.

Whether on the Apple Store or the Google Play Store, the first two screenshots are displayed in the search results. They are therefore, the most important and must include the best features of the app (one feature per screenshot). 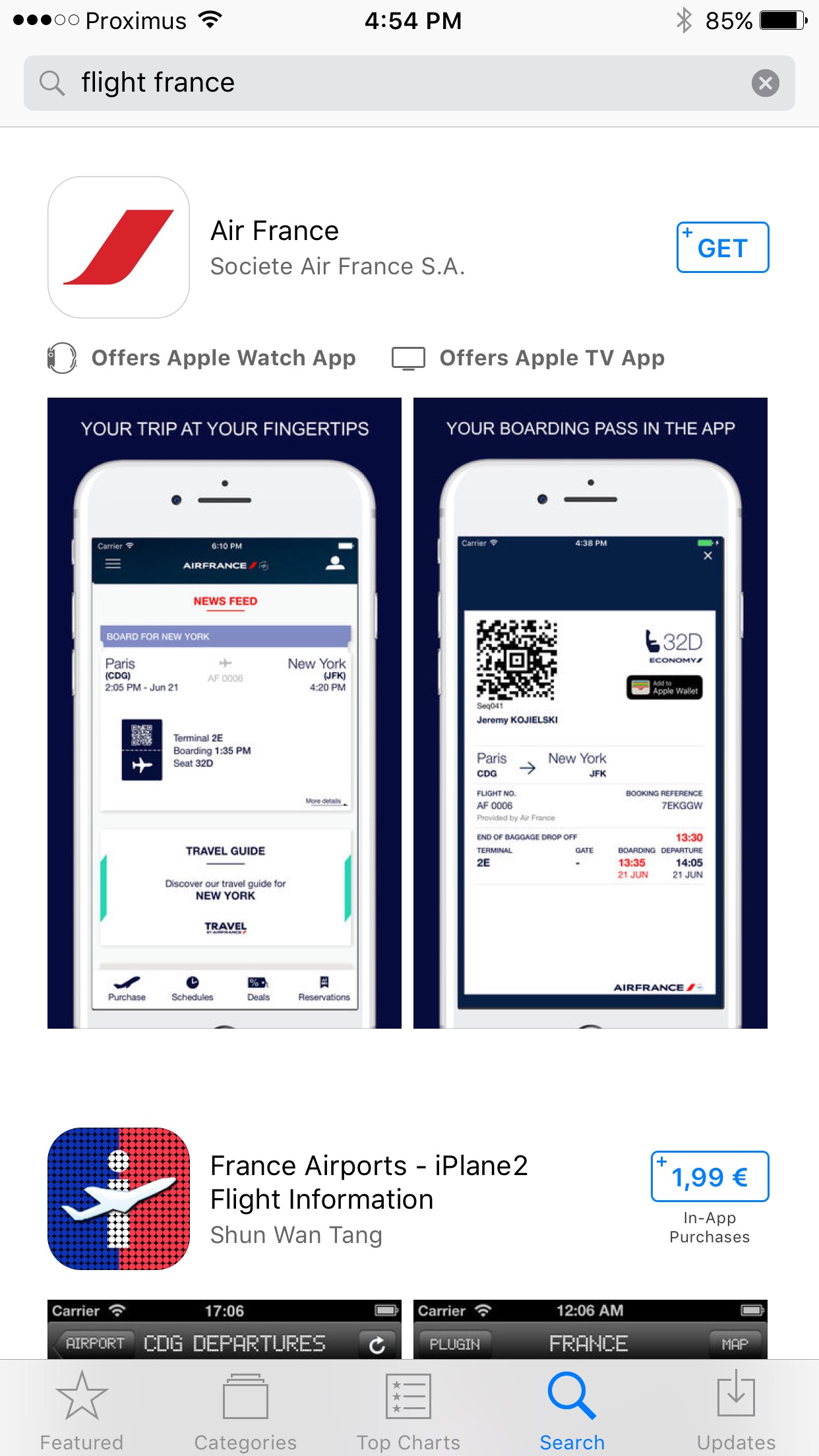 If the app has a video, it will be displayed instead of the first screenshot. The app preview/promo video has revealed itself to be a major advantage in terms of conversion, so it must not be forgotten.

For Apple, the app preview must last between 15 and 30 seconds. On Google, the video must be hosted on YouTube and last between 30 seconds and 2 minutes.

Additionally, on the Apple Store it’s possible to submit up to 5 screenshots whereas on the Google Play Store, 8 are allowed.

A good practice is to insert a small descriptive phrase above each screenshot in order to provide further explanation.

Nowadays, the opinions of consumers are a decisive factor for potential customers. Indeed, people trust others more and more before making a purchase, choosing a hotel or a restaurant, or even before going on holiday.

The same goes for apps. Users rely heavily on the opinions of others before downloading an app. It’s therefore important to gather a large number of ratings and reviews (positive ones of course!).

What’s more, algorithms give a lot of weight to the total number of ratings and reviews as well as their average. These are given direct consideration when the app is classified and can be strongly penalized in classification in the case of multiple negative ratings.

On the other hand, if the app has lots of positive ratings then this will be favored by the algorithm, which will push it to the top of the search results.

A good technique is the use of push notifications to encourage users to rate the app. However, it’s important to choose the right time to ask users for this (after around 5 uses).

To avoid negative ratings it is, of course, essential to make sure that you offer an enjoyable and positive experience by correcting any bugs as quickly as possible. It’s also recommended that you provide users with a precise point of contact for any complaint or question (an email address or a help form on the app itself).

Finally, don’t hesitate to respond to negative reviews on the Google Play Store (this is not yet available on Apple).

It’s therefore important to make sure that you’re always up to date with the latest changes and that you dedicate the necessary time in monitoring your app and its competitors.

Metadata features, but especially the app’s keywords, must be regularly updated (ideally every month) so that it brings freshness for not only the users, but also for the algorithms which favor ‘living’ apps.

As well as this, with every new update the app’s ratings and reviews go back to zero: the perfect opportunity to get rid of negative ratings.

It’s also vital to make sure that you localize the app’s title, description, screenshots, and keywords according to the country targeted.

Although ASO allows you to influence the app’s position in the store, there are still features that the developer or marketer doesn’t have direct control over.

Algorithms also take into consideration the total number of downloads, uninstalls, the conversion rate and even the retention and engagement rates.

It’s therefore interesting to use a tool that allows you to measure this data over time to effectively assess the performance of your app.

For maximum effectiveness, ASO must be integrated into a more global app marketing solution which uses various channels such as social media, paid purchasing, content marketing or public relations for example.

Whatever methods you choose, optimizing an app which has never before been optimized according to these best practices, will no doubt result in a considerable rise in the number of organic downloads. 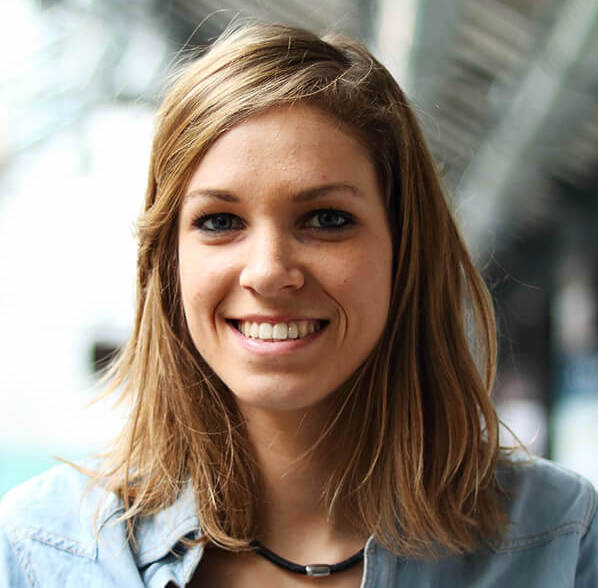